Thrive with Purpose when Changing Careers

Throughout the 20th century, the concept of the career employee represented the gold standard for most of the workforce. If you could land a position with plenty of job security, you could stay in that role for years and work your way up the ranks of a single company.

Despite this, changing careers has always been a hallmark of professional life.

Most of the people in the 20th-century workforce switched careers several times. According to the Bureau of Labor Statistics, individuals born between 1957 and 1964 (the “Baby Boom” generation) held an average of 11.9 jobs from age 18 to 50.

However, according to a recent Gallup poll, those born between 1980 and 1996 (the “Millennial” generation) are more likely to switch jobs than their predecessors. In the poll, 60% of those surveyed said they were open to a different job opportunity, and 36% reported they would actively look for a job at a different organization within the next twelve months.

Job-hopping, upskilling, and retooling are now the norm. Moreover, the trope of climbing the corporate ladder no longer applies to today’s workforce. Instead, future professionals will likely switch careers — and even industries — more in their lifetimes than at any other time in history.

The question remains, “Where can today’s employees find support to help them along in their career process?”

A good education is important, but another support system lies in educational associations and institutions like BRM institute, which provides resources, knowledge, and business relationship management training.

Business Relationship Management (BRM) is both a discipline and a capability, yet most importantly a philosophy that encompasses organizations as a whole. From HR to IT, business relationship management plays a part in the value contribution of any role or capability.

Incorporating BRM into your career path begins with foundational knowledge, acquired through the foundational BRM competencies.

Ultimately, these competencies ensure you can effectively deliver value to a business and its partners, both as a professional and as a business relationship manager.

Once you have a foundational knowledge of BRM, you can execute the core BRM disciplines through the House of BRM.

As follows, the four core BRM disciplines, forming the pillars on the House of BRM, include Demand Shaping, Exploring, Servicing, and Value Realization.

BRM Institute provides certifications that educate professionals on how to learn, mature, and master BRM. Additionally, BRM is a transferable, and highly marketable, capability backed by professional and world-renowned certifications. 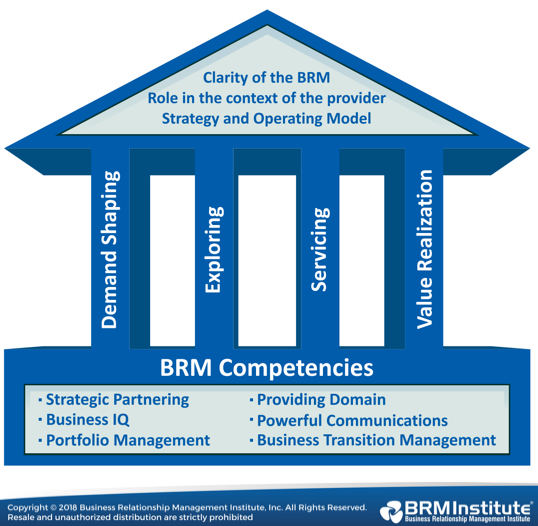 If you gain mastery over BRM, you can provide unparalleled value in any career, across all functions and industries.

To become a strategic partner as a BRM practitioner requires more than simply being a good employee.

A successful BRM fosters effective communication between departments and serves as a relationship-building leader in an organization. Furthermore, an individual with a mature BRM capability can succeed across multiple functions, from HR to Finance to IT.

Alarmingly, when considering their work, business professionals commonly consider their formal and informal relationships as secondary to professional life.

However, research is proving that those very relationships are what provides true value in business. Strong relationships lead to trust, collaboration, problem-solving, and accountability. Thus, profit and productivity naturally arise as a direct result of these relationship characteristics.

Of course, one of the most effective ways to build a meaningful business relationship is to acquire a mentor. You can find mentorship within associations and institutions like the BRM Institute, and you can even find opportunities to become a mentor yourself.

Associations also give you an opportunity to take advantage of new learning programs and business networks that can facilitate your career changes.

Those proficient in BRM favor collaboration over silos. They favor leadership to management. And they favor intangible values to external incentives.

BRMs can transition from position to position seamlessly, building meaningful and valuable relationships along the way.

Most importantly, through BRM, you’ll have a skill set that spans companies and industries. Thus, no matter where your career takes you, you’ll be prepared to work with your business partners to generate value together.

Don’t wait to get started with BRM.

If you’re thinking about changing careers soon, get the skills you need to thrive. Register for one of our free upcoming webinars, or learn more about BRM to get started.