Who’s On First? Playing Together Within the Provider Organization

This article is the first in a series of two about clarifying the interactions of the BRM with other roles in the provider organization. In this post, Part 1 provides an example of how one company reached role clarity across the intersecting roles.  On a future blog post, Part 2 will explore areas where there is typically contention or confusion about specific roles.

Picture this:  your IT organization just introduced a new BRM role and you are the first person placed in that role!   Terrific news, right?  You get to shape the role and be a pioneer for something you believe in deeply.  As I always to say to one of my long-time colleagues, “You go first.”  Going first is often overrated!

You are probably expecting your greatest challenge to be building a strong relationship with your business partner.  Though this is indeed a big challenge, you might be surprised to find that the greater challenge lies within the provider (IT) organization!

It all starts with your CIO’s innocent statement that the BRM will be a business partner’s “single point of contact.” Yikes—really?  In one fell swoop, the CIO just set you up for a flurry of very interesting dynamics among your peers and partners within the provider organization. Who could possibly fill the role of a ‘single’ point of contact? Then again, who would want to? Also, it puts you at odds with everyone else who not only wants business partner interaction but also actually needs it to do their work.  And so the dynamics begin…

In my consulting work with many organizations that have launched the BRM role, one of the most important lessons is that organizations notoriously forget that – as Gareth Morgan in Images of Organization (2006) put it – “the survival of a new role can only be survival with, and never survival against the environment or context in which we are operating; there are complex patterns of reciprocal connectivity at work.”  Your effectiveness as a BRM is highly dependent on how others in the organization understand not only what your role is, but also how they fit with it in terms of day-to-day work.  So how can you facilitate this understanding?

After a reorganization that introduced the BRM role among other changes, one of my clients had to conduct a full organizational/role clarity initiative. Typical RACI charts are helpful to a point, but they aren’t very specific. This client wanted more detail and insisted that the entire management team (two levels below the CIO) participate. They knew that the conversations would be even more important than the resultant RACI charts.

Before heading into RACI wonderland, we took the time to define the ‘essence’ of each role in the organization. This meant reducing all the duties of a specific role to just a handful of core components. For the BRM role, we chose typical core components such as Business Relationship Management, Business/IT Strategy & Planning, Portfolio Management, Project Mobilization and Steering, and Delivery & Support Facilitation.  We explained them in terms of the desired outcomes and the result was a one-page ‘essence’ of the role.

Then the team walked through the phases of their Systems Delivery Life Cycle (SDLC), as well as other key processes such as Portfolio Management and the full set of Support (ITIL) processes. The group also created detailed bullets within the RACI charts (see illustration below) by deliverables and by phase.  They insisted on one overall accountable role for each phase or process to provide the “single liable party” if the phase wasn’t going well.  For example, the BRM role was accountable for both the Concept and Project Preparation phases, which together made up “Project Mobilization.” 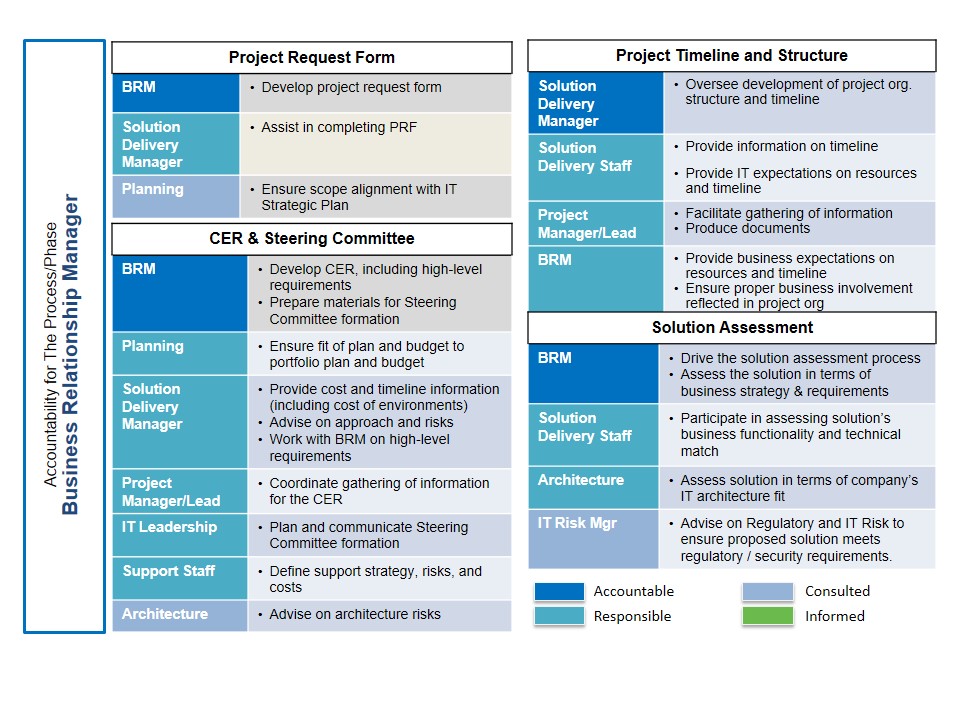 A critical part of the role clarity exercise was the development of scenarios and scripts that showed the most typical areas where clarity was needed and the playing out of those scripts in front of the entire IT organization. The flow, interactions and points of collaboration were much clearer to all. Other role clarity methods mentioned in BRM Institute webinars include the development of an Interaction Model that shows how specific items flow among the roles, or the use of simulation software to illustrate how work flows.

The time and energy in clarifying roles and interactions is definitely an investment for the organization.  The payback, however, is not only smoother interactions and a successful BRM implementation, but also a deeper understanding of how to effectively work together to bring value to the business partner!