Why a Square Peg Never Fits Into a Round Hole

Picture this: you’re finishing up a stressful day at work. Everything that could have gone wrong went wrong. You missed the mandatory meeting, you got the call that the funding dried up for your project, you failed to impress the leadership once again, and you found out that the key member on your team quit to work for your competitor. It’s been the worst day—ever!

When you get home, you find yourself on your bathroom floor, in a puddle of your own tears, drowning in self-doubt, anxiety, and utter devastation. You can’t stop playing the day over and over in your mind, questioning your choices, doubting your abilities. You realize every adjustment you made and every sacrifice you endured was futile. Even though you’ve worked smart, hard, and been dedicated to your organization, the bottom fell out and you were left on your bathroom floor with all of the reminiscences of workplace stressors piling up around you.

Sound Familiar? You are not alone.

According to a survey commissioned by the American Psychological Association (APA), 71 percent of people feel tense or stressed out during their workday.

Workplace stress isn’t something new that showed up banging on the bathroom door you locked yourself behind. Studies have been conducted for decades. Granted, there were different subjects, job titles, and environments a decade ago, and fortunately, the focus on mental health within the past several years during a world-wide pandemic has become one of the biggest focal points in recent studies and surveys.

The APA’s Work and Well-Being Survey, conducted in 2021, presented numbers that didn’t paint a beautiful landscape of rolling mountains of support or puffy clouds in the blue skies of growth and opportunity. 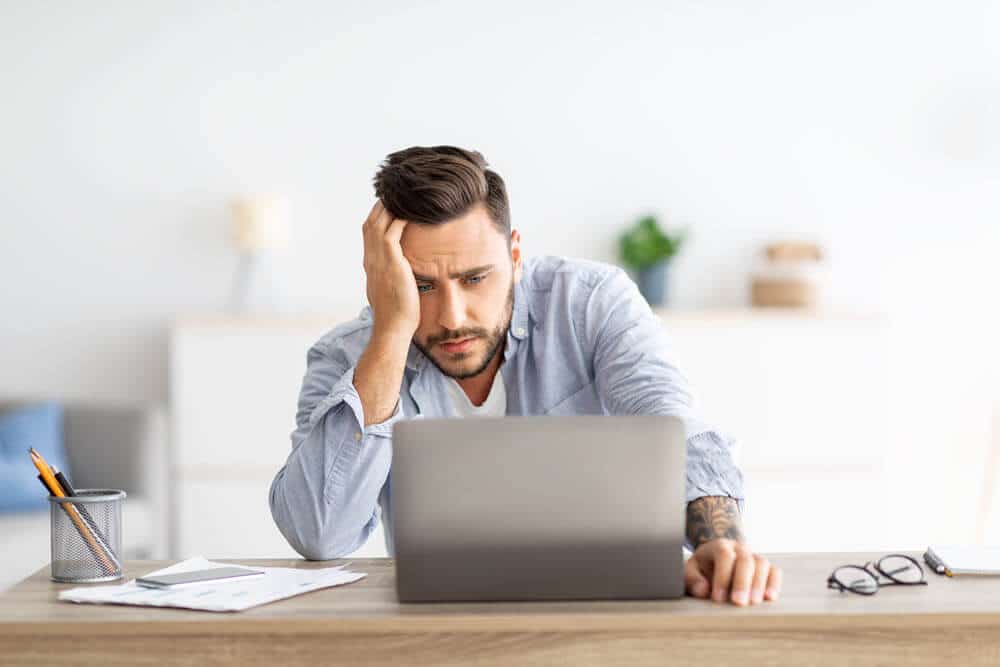 There were no people singing praises of appreciation and no dancing dandelions chanting their devotion. The results of their survey were messy, staggering and, as you may suspect, not surprising at all.

Why are people stressed out?

You can’t surprise people who are interlocked by living the percentages. People who live with these stresses day-in and day-out don’t need numbers to confirm where they have been existing with regard to their wellbeing. But for the sake of clarity, here are the results from APA’s Work and Well-Being Survey of 2021. The top percentages of stress in the workplace range from low salaries all the way to problems with a co-worker. The chart below shows the percentage of survey participants and their top reasons for the compounded stress in the workplace.

Three in 5 (that’s 59 percent of survey participants!) say stress has negatively impacted their performance at work.

People are reaching a breaking point, and workplace burnout is leading the charge. According to a Deloitte survey of 1,000 full-time U.S. professionals, 77 percent of responders claimed they have experienced employee burnout at their current job. While 87 percent of these professionals have a passion for their current role, 64 percent claim they are frequently stressed. Maybe they aren’t on their bathroom floor drowning in waves of anxiety, but who’s to say they aren’t far off from tossing themselves on their bed and screaming at the top of their lungs into a goose down pillow? At what point do we stop sacrificing our mental health and start to create change?

Change isn’t easy. Nobody worth their salt is going to tell you anything different. Change is uncomfortable, it’s un-nerving, and it can be downright scary. And for creatures of habit, as we are, it will throw us off our game. So, when something presents itself dressed up as change, we may find ourselves backing away until we are pressed against the wall and forced to come out swinging, or we sacrifice ourselves, because, well, change will inevitably catch up to us. Interestingly enough, most of us are willing to take on the stressors at work to avoid bringing attention to our mental and personal needs. We have been conditioned that being open and vulnerable to our leaders and team members is a sign of weakness.

Fortunately, it looks like this ideology is changing, and we may not have to try and fit the square peg into a round hole anymore. Put away the whittling blade, because shaving the corners off of who you are will not be required. As a matter of fact, it appears that there are more and more opportunities to find a square hole you can fit into instead of trying to force something that will never work.

When the complex is made simple…

There’s nothing complex about it. The numbers are in, and 87 percent of people know what they need from their team leaders to improve their mental health. What they need is action!

What type of action? 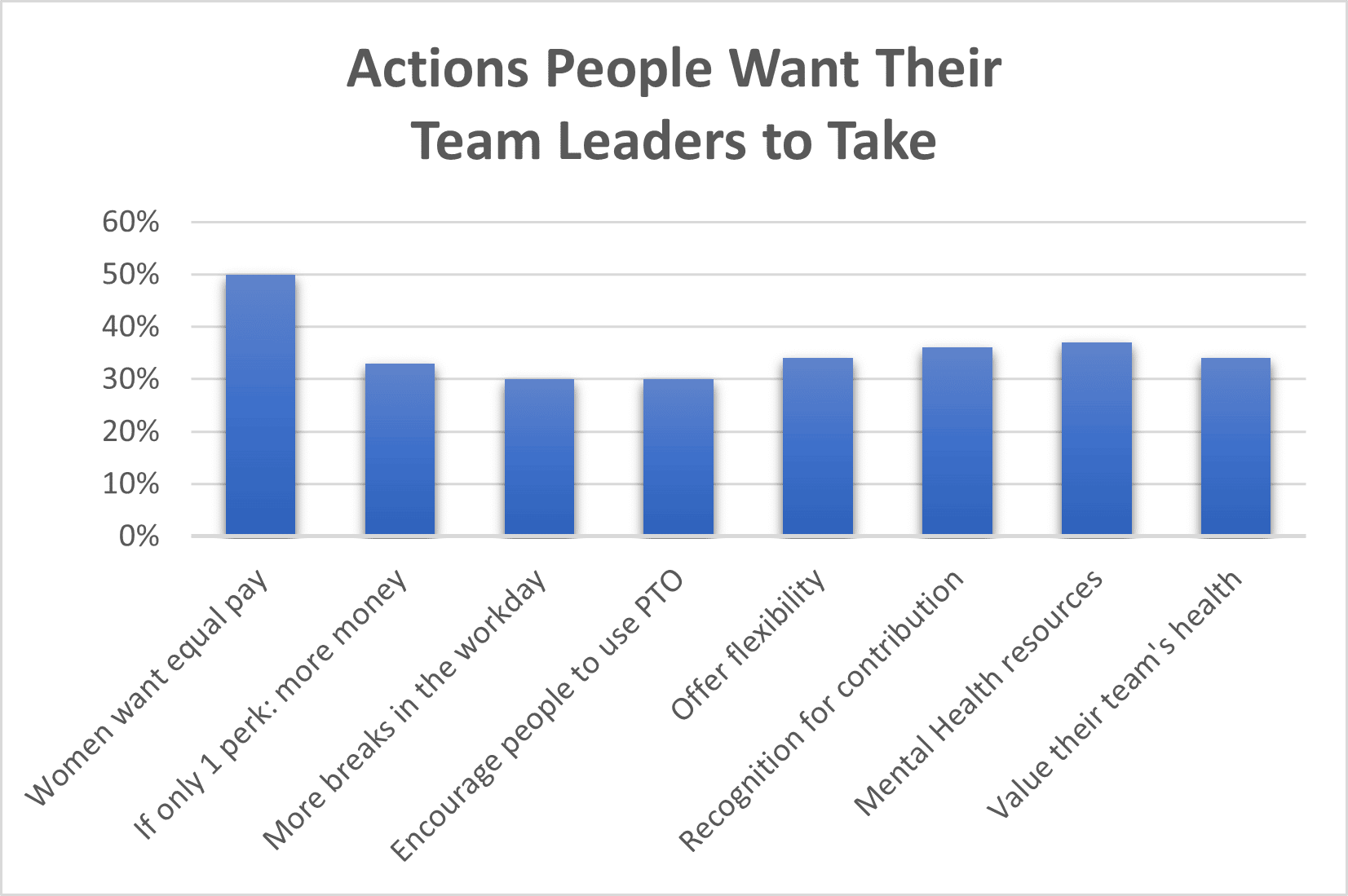 Let’s not tiptoe around the issues, or Rochambeau for which team leader is going to tell poor Martha that asking for flexibility isn’t in her best interest. The aforementioned needs in the chart above aren’t ludicrous by any means. Equal pay for all, flexibility, encouragement to take paid time off, pay that reflects worth, and access to mental health resources should be basic offers from all organizations, across all functions, and simplified to be accepted worldwide.

When people’s needs are met and they feel valued, the organization prospers. Morale goes up, missed workdays dwindle, and their personal investment into the organization becomes visible. People want to care about what they are doing, and they want their team leaders to invest in them. People are an organization’s biggest value.